Timers and Delays are a little more complex but add important functionality to rules. Whilst the "Wait-For"-block is straightforward, the timer blocks should be well understood before being used - they may behave differently than expected. This chapter explains what these blocks do, sometimes displaying generated code to explain what is happening behind the scenes.

More about that topic can be viewed at Timers (opens new window).

# Overview of the Timers and Delays category Timers are created and referred to by name, enabling manipulation within a rule.

Important: a named timer is only available within the same rule. The same timer cannot be accessed via a different rule. A different rule with a timer of the same name results into two separate timers.

Function: Suspends execution of the rule for a given period of time

The following simple example uses a loop to implement a blinking light with a 1 second delay, looping three times:

# After period of time Do With Timer Function: Schedule a task to be performed once after a specific amount of time has elapsed.

10 seconds after the rule has been called, the timer triggers all lights to go off:

Function: Sometimes one may want to use the same timer and reschedule the same block of code again. This can be achieved with the reschedule-block

An example is as follows:

Setting up an endless timer in the above way is not recommended. The example shown below will stop rescheduling after 3 doorbell rings. Function: Schedule a task to be performed at a specified period in the future with the ability to reschedule, cancel or ignore the timer when the rule is retriggered.

Before using that block, it is important to understand what the idea behind the option of retriggering: Though it may not seem to be obvious, the same rule can be retriggered at any time. To allow more control about what is happening in this case the rule is executed again, the following options are available: 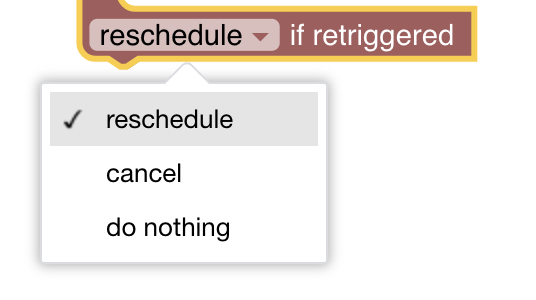 The following code example and the following are provided to understand what exactly happens behind the scenes:

The simple timer-block generates the code shown underneath the image below.

The retrigger timer-block inserts an additional else{} branch into the generated code which will run if:

In the case of do nothing the else{} branch is empty (which turns to be almost equals to the simle-timer).

In the case of cancel the else{} branch contains code to cancel the timer.

Function: returns true if the timer itself is currently counting down, and the code within the timer will be eventually executed as scheduled. This block will return false if the timer doesn't exist, has been cancelled, or has already finished.

The intent here is to trigger an alarm to the police but allow the timer to be reset in case a reset button has been pressed during the trigger time. The rule is triggered when the burglar-alarm-item or the reset-button-item is changed.