You can think of rules as routines or behaviours for your smart home.

Many people have a routine when they wake up in the morning: make the bed, make coffee, make and eat breakfast, brush their teeth, etc. Similarly your smart home can have a routine: when the sun rises raise the blinds and adjust the temperature. Another routine could be to turn off all the lights and turn down the temperature when you leave home: openHAB can do that for you. There is no need to open your app and switch of the lights manually. Do you want to hear your favorite music when you arrive back at home? No problem, openHAB can do that for you too. Rules can also remind you of things, for example, that you opened the window hours ago and forgot that it is open? openHAB can send a notification to your phone.

Other systems may have a concept of Automations, Tasks, and other terms. In openHAB, rules are used to implement all of these concepts.

# Parts of a Rule

Any single rule is not required to have all of these (although a rule without an action is not very sensible). An individual rule can also have more than one of each.

Even though it might not seem sensible first, as the rule would never run on it's own, one can also have a rule with no triggers. But why would somebody want such a rule? In some cases, it is useful to have a rule that is only manually triggered. Sometimes there is advantage in a rule that calls another rule. In both cases, the rule has no triggers and no conditions.

Now that we know the concept of rule triggers, let's look at them in more depth. Triggers define those events that, when they occur, causes the rule to run.

These are the categories of rules that can be used to trigger a rule:

Triggers and Events - What's the difference?

An event is something that happens and is detectable by openHAB. Some events for rules are time events, system events, Item state and command events, etc.

A few examples of events that could be used to trigger a rule:

A Trigger is like a filter that, when it matches one or more events, causes the rule to run. Triggers can therefore be very specific to match very specific events (e.g. a change in a Switch Item from ON to OFF, a Dimmer Item receives 57 as a command, etc.) or relatively generic and match many events (e.g. every minute, a Color Item receives any type of command, a member of a Group Item changes in any way, etc.).

Here are the details for each trigger type:

You can listen to commands for a specific Item, on state updates or on state changes (an update might leave the state unchanged). You can decide whether you want to catch only a specific command/state or any.

The command event means a command, which controls an Item (e.g. turns the light on) was sent. The update event means the Item's state got updated (e.g. the light turned to ON).

When using a received command trigger, the rule might trigger before the Item's state is updated. Therefore, if the rule needs to know what the command was, there is an Available Value.

As with Item based event-based triggers discussed above, you can listen for commands, state updates, or state changes on the direct members (but not the indirect members of a nested subgroup) of a given Group. You can also decide whether you want to catch only a specific command/state or any.

The Available Values are populated using the event on the Item that caused the trigger and that triggering Item's name is provided as an additional value.

Also, as with Items triggers, when using a received command trigger, the rule might trigger before the Item's state is updated. Therefore, if the rule needs to know what the command was, there is an Available Value.

Time Triggers are provided as described in the table below, support may vary on the used rule language:

Time triggers do not provide any information in the Available Values.

You may use the generator at FreeFormatter.com (opens new window) or the openHAB WebUI rule setup to generate your cron expressions.

Your rules can take actions based upon trigger events generated by these trigger channels. You can decide whether you want to catch only a specific or any trigger the channel provides.

When a binding provides such channels, you can find the needed information in the corresponding binding documentation. There is no generic list of possible trigger events. The triggerEvent(s) available depend upon the specific implementation details of the binding.

If the rule needs to know what the received event or the triggering channel was, use the Available Values.

Your rules can take actions based upon status updates or status changes generated by Things. You can decide whether you want to catch only a specific or any status the Thing can get updated too.

You can find all the possible values for status from Thing Status.

The thingUID is the identifier assigned to the Thing, manually in your configuration or automatically during auto discovery. You can find it from UI or from .things files. For example, one z-wave device can be "zwave:device:c5155aa4:node14".

If the rule needs to know what the triggering Thing was, or access the previous or new status, use the Available Values.

Refer to Thing Status Action to find how to get the new thing status details or description in the script.

The System triggers include the system start level trigger.

You may wish to use some start level to initialize values at startup if they are not already set. You can then execute a rule on the next startup level which depends on the value set by the initialization rule.

Start levels less than 40 are not available as triggers because the rule engine needs to start up first before it can execute any rules. Please keep in mind that rule engines provided by separately installed automation add-ons might not start executing rules until after start level 100 is reached.

With triggers, we have the When __t__ happens* part completed, so next up is the *if __c__ part. This part can limit when a rule can run by adding one or more condition(s).

Conditions as a separately definable part of a rule are supported by some rule engines. In situations where the rule engine does not support conditions, you can implement your conditions using an if-statement in the rule action.

Available types of conditions include:

The script condition is the most universal one, as you can choose one of the many available script/rule languages to build any condition you can think of. The only restriction is a script condition's last executed line of code must result in a boolean (i.e. true or false).

Unfortunately the term "Script" is overloaded in openHAB, and has multiple meanings based on the context:

These rule docs mainly refer to the first two meanings when talking about scripts.

Script Actions are an action that allow you to run logic written in one of the available automation/rule languages, e.g. JavaScript, Rules DSL, Blockly.

Text based rules will typically allow only a single script action to be defined (e.g the code between the then and end in a text based Rules DSL or the function passed as the execute parameter in a JS Scripting rule is the script action for that rule).

The availablity of those values depends on the rule engine, but you can generally expect at least the following information (depending on the trigger):

For further information which values are available and how to access them, refer to the documentation of the according rule engine.

At some point, when basic UI rules are not sophisticated enough, rule templates can help. Someone may have already written the rule and provided it as a template in the community marketplace.

To enable access to rule templates, navigate to Settings -> Community Marketplace and toggle Enable Community Marketplace to ON. Then to install a rule template, visit the web UI and navigate: Settings -> Add-Ons -> Automation -> Scroll down to the Rule Templates section. Click on a rule template to review it's documentation, open the community thread and install the template to your system. Check the template's documentation for dependencies and install them! Otherwise the rule won't work.

Once a rule is created, it is seperated from its template and can be further customized. To update a rule template, return to the Automation menu in MainUI, select the rule template, remove it and then readd it. Then to update a rule from the template, delete the rule(s) that were instantiated from the template and recreate them. Note, when clicking on the "Code" tab of the rule, the properties used when instantiating the rule are preserved in the configuration section.

Helper Libraries simplify the interaction with the openHAB runtime by providing convenient access to common functionality, and provide type conversion from Java types to native types of the chosen rule/script language. By providing this functionality, they help avoid type errors and heavily reduce the amount of boilerplate code required to import and use openHAB classes.

Each UI rule will have a "code" tab showing the full rule definition. When asking for help on the forum, the representation of the rule from this code tab will be the best way to show your full rule.

It is recommended to use helper libraries where they are available, as they provide an easy-to-use API to access openHAB functionality and avoid type problems related to the different languages combined.

# When the sun rises, raise the blinds and adjust the temperature

This example is using the Astro Binding which calculates many values for sun and moon, including sunrise. 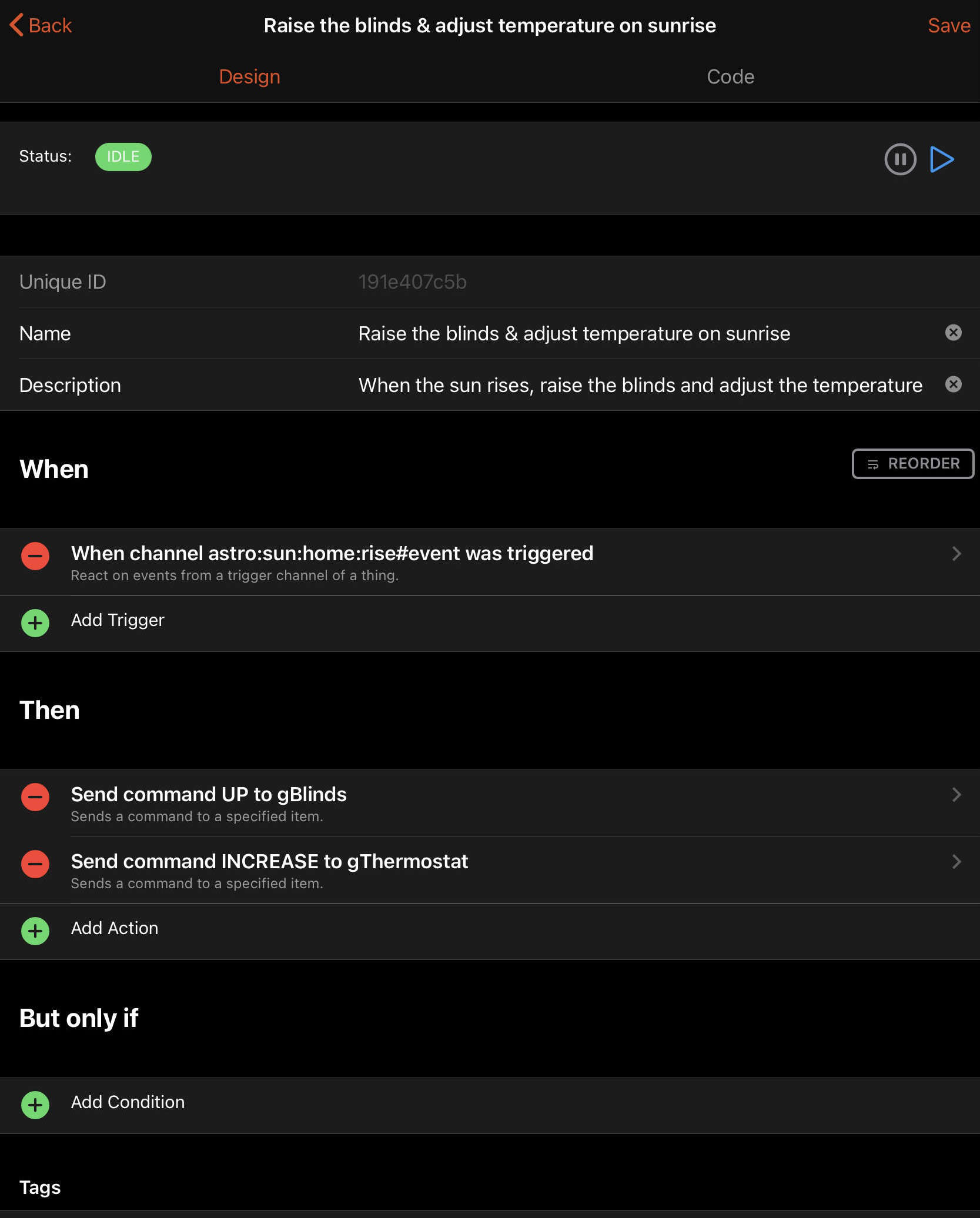 The trigger in detail: 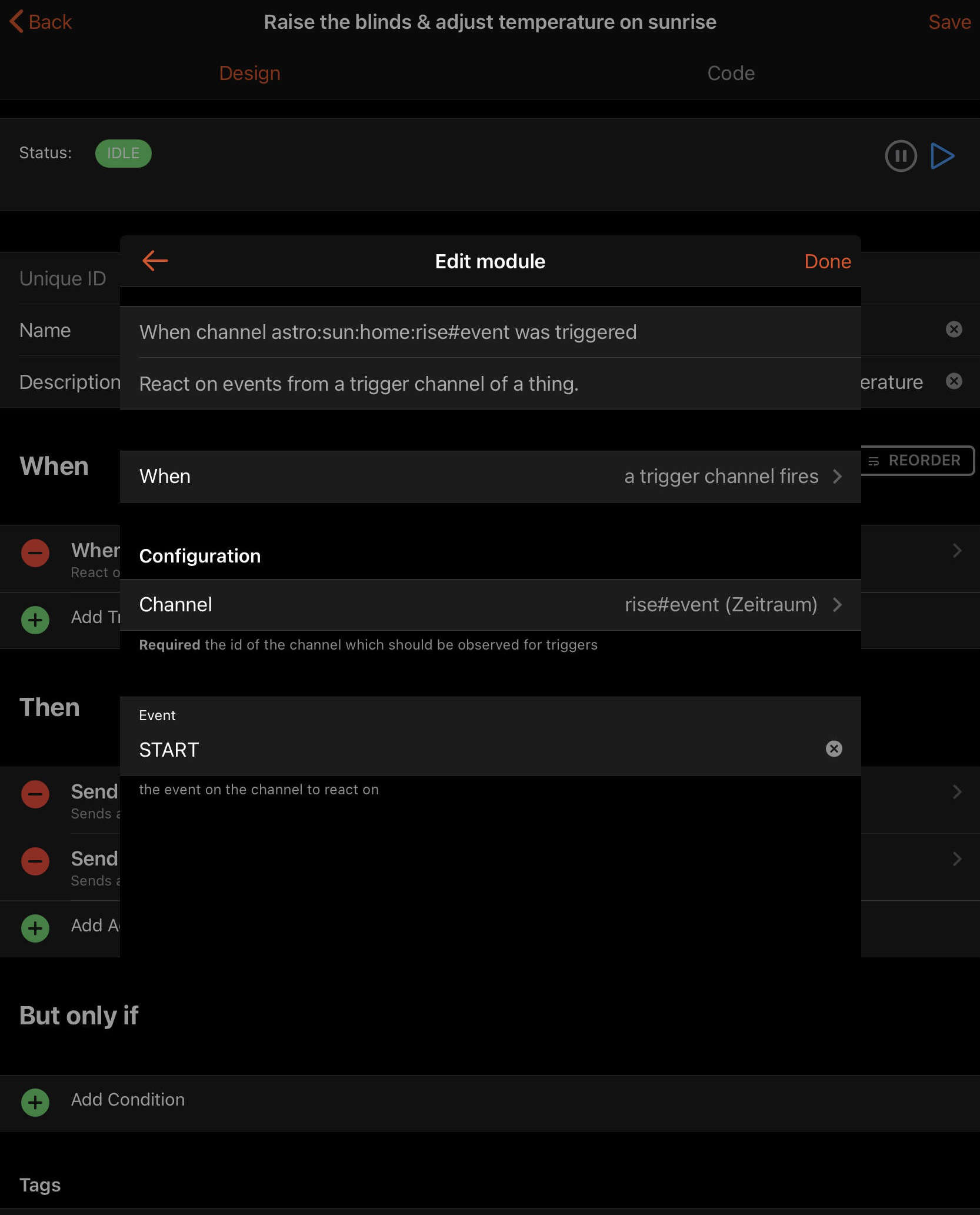 # When you leave home, turn off the lights and lower the temperature

Examples for presence detection include the iCloud Binding, Network Binding, GPSTracker Binding, etc., but you could also use a simple wall switch. 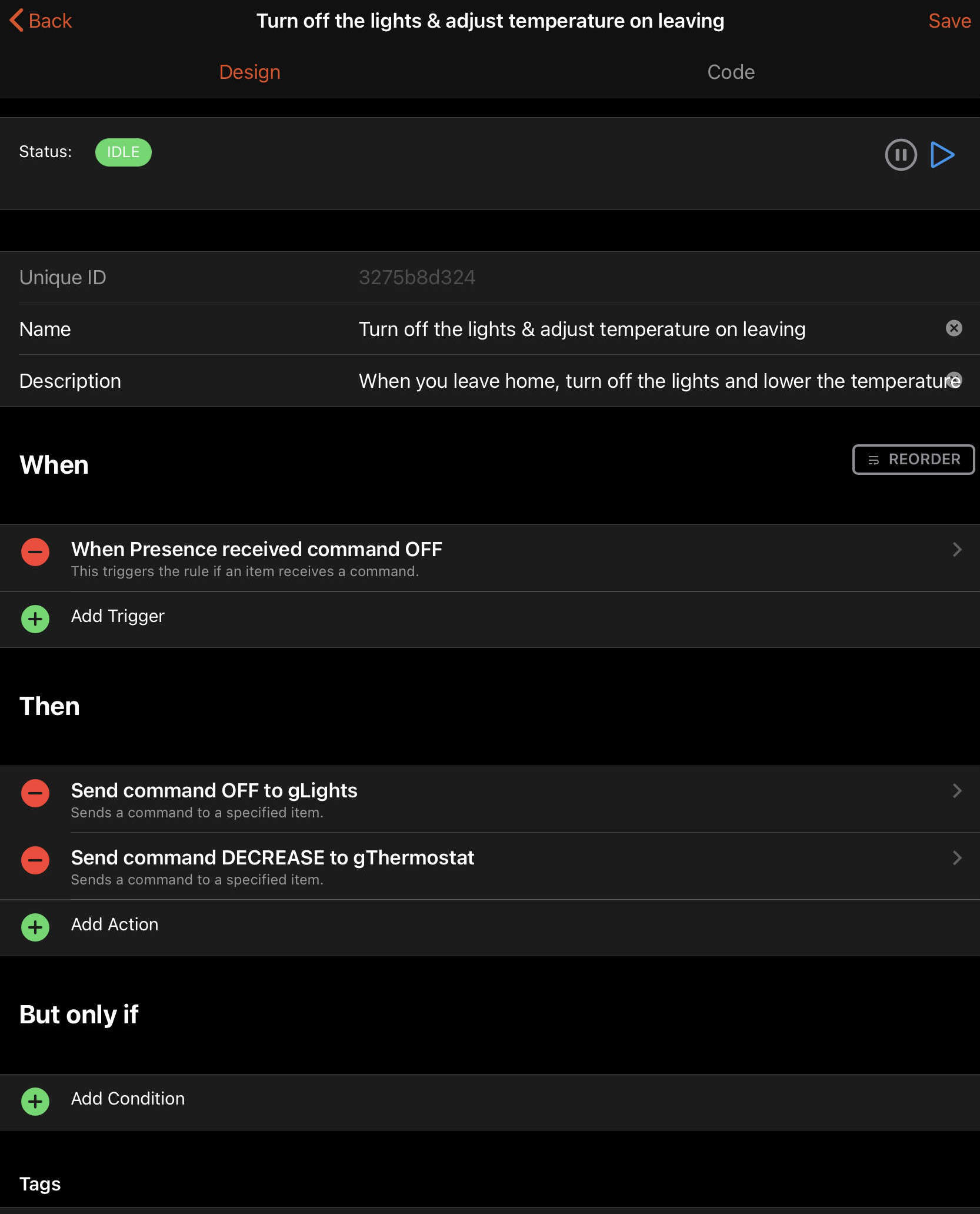 # When you return home, and it is between 1 PM and 6 PM, play your favorite music 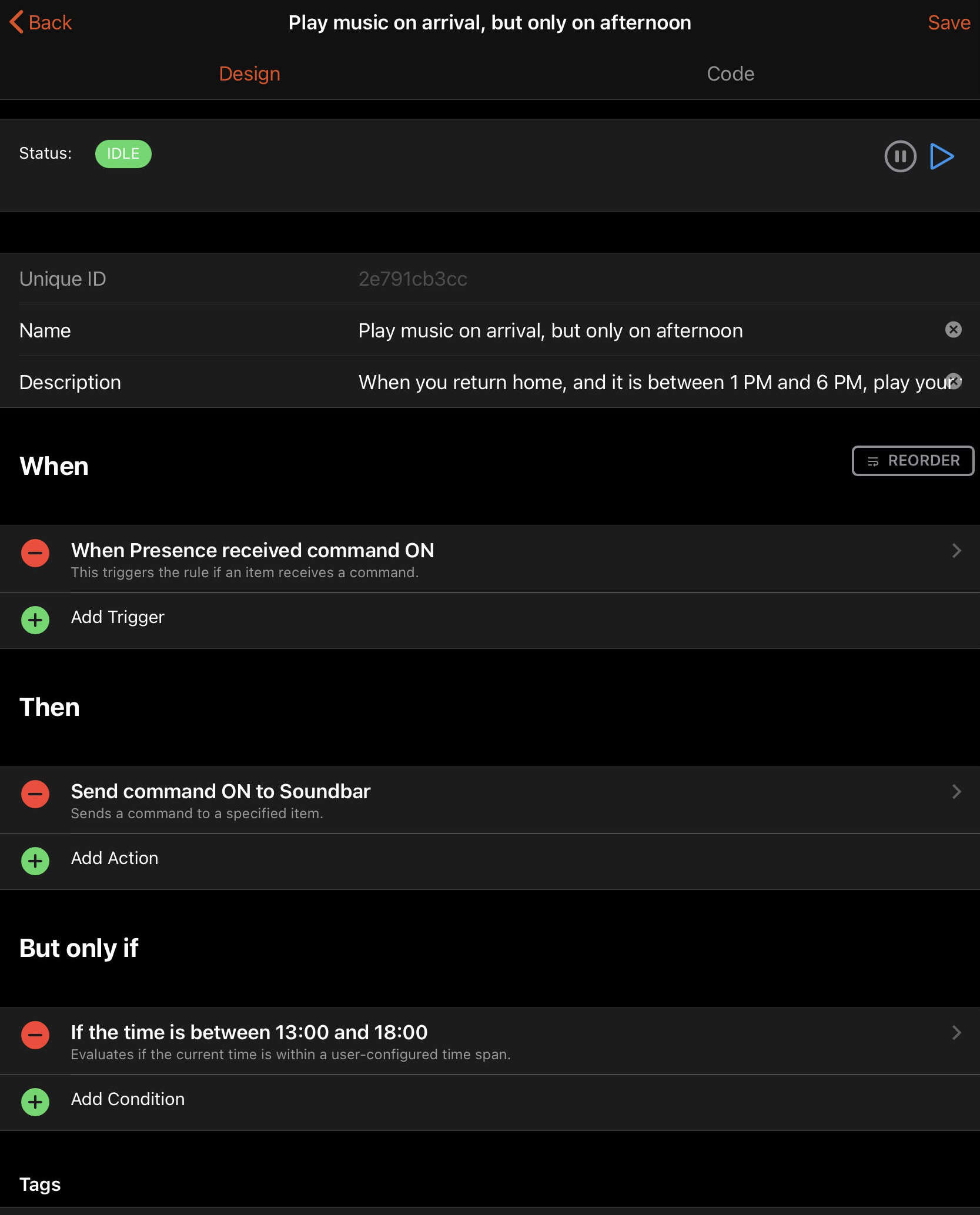 # Remind you that the window is open for an hour 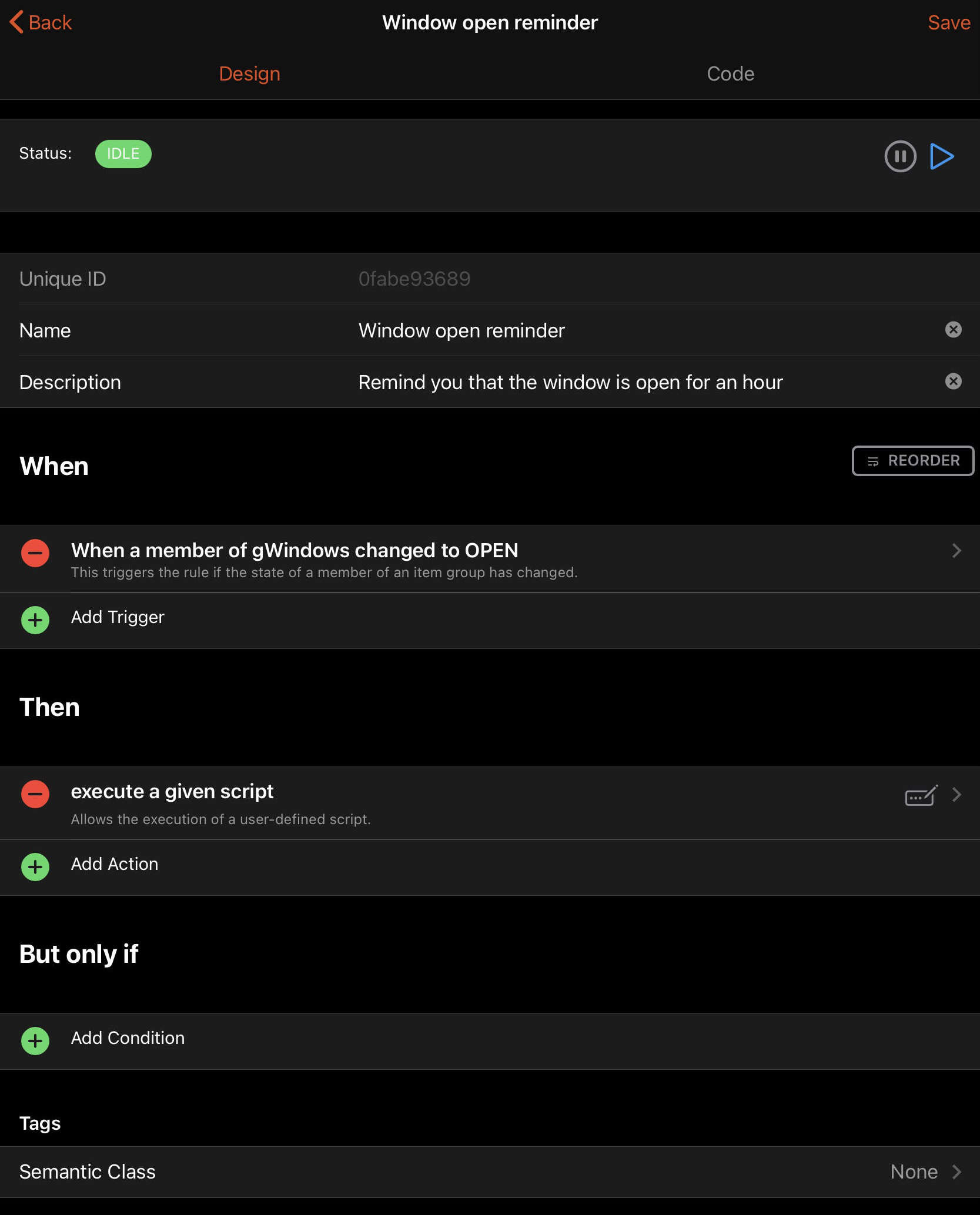 The script action in detail (for the scipt see the YAML): 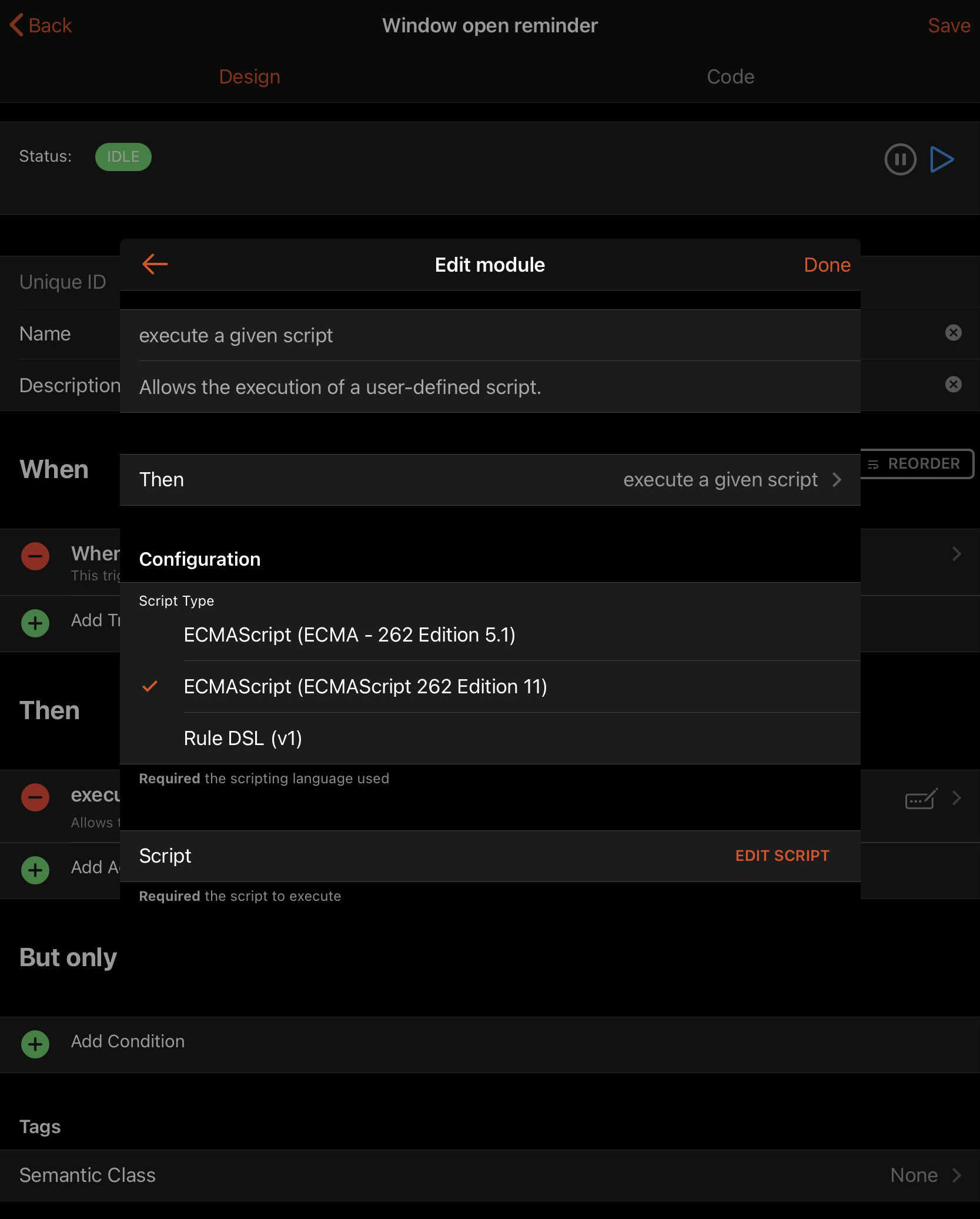 This rule example allows you to set multiple Items to a defined state using a single action.

You might know this concept of "Scenes" from Apple HomeKit, Google Home, Philips Hue, etc. 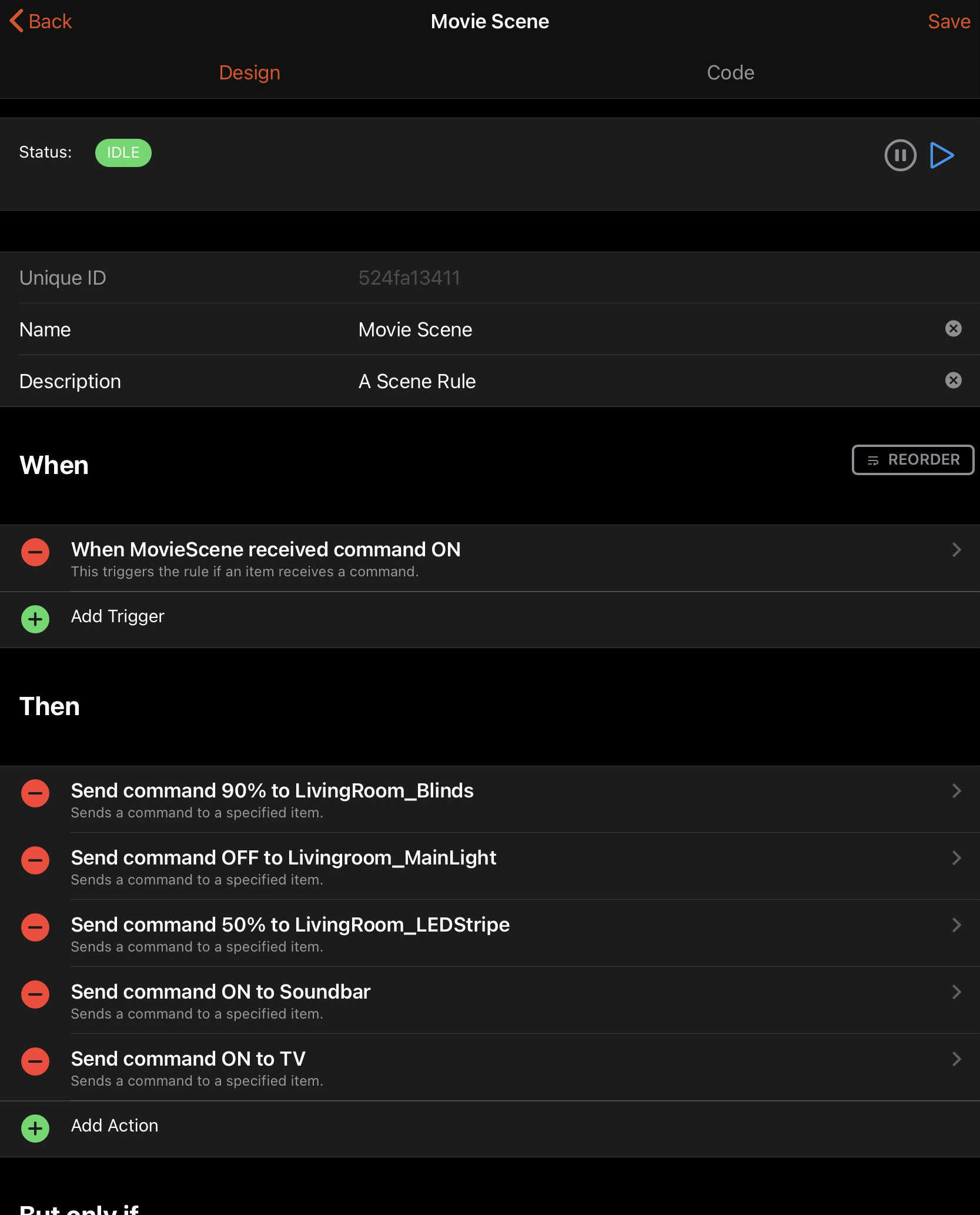