Things are the entities that can physically be added to a system and which can potentially provide many functionalities in one. It is important to note that Things do not have to be devices, but they can also represent a web service or any other manageable source of information and functionality. From a user perspective, they are relevant for the setup and configuration process, but not for the operation.

Things can have configuration properties, which can be optional or mandatory. Such properties can be basic information like an IP address, an access token for a web service or a device specific configuration that alters its behavior.

Things provide "Channels", which represent the different functions the Thing provides. Where the Thing is the physical entity or source of information, the Channel is a concrete function from this Thing. A physical light bulb might have a color temperature Channel and a color Channel, both providing functionality of the one light bulb Thing to the system. For sources of information the Thing might be the local weather with information from a web service with different Channels like temperature, pressure and humidity.

Channels are linked to Items, where such links are the glue between the virtual and the physical layer. Once such a link is established, a Thing reacts to events sent for an item that is linked to one of its Channels. Likewise, it actively sends out events for Items linked to its Channels.

A special type of Thing is a "bridge". Bridges are Things that need to be added to the system in order to gain access to other Things. A typical example of a bridge is an IP gateway for some non-IP based home automation system or a web service configuration with authentication information which every Thing from this web service might need.

Each Thing has a status object, which helps to identify possible problems with the device or service. The following table provides an overview of the different statuses:

The statuses UNINITIALIZED, INITIALIZING and REMOVING are set by the framework, whereas the statuses UNKNOWN, ONLINE and OFFLINE are assigned from a binding.

Additionally, the REMOVED status is set by the binding to indicate that the removal process has been completed, i.e. the Thing must have been in REMOVING status before. 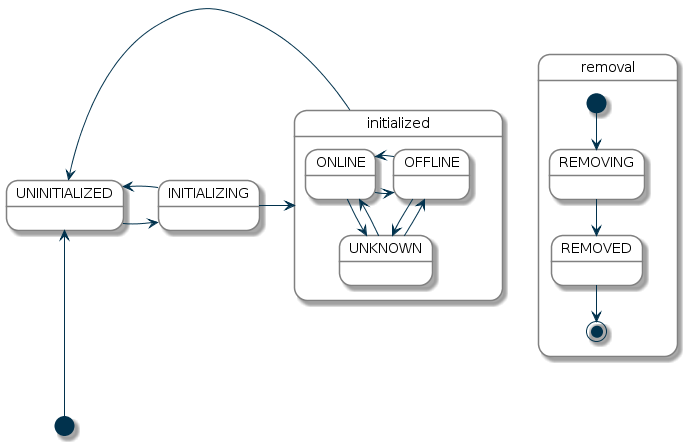 A status is detailed further with a status detail object. The following table lists the different status details for each status: