Some time has passed since the openHAB 2.0 beta2 release and a lot development efforts were done - so it was clearly time to release openHAB 2.0 beta3 (opens new window). I see that many openHAB contributors and users are moving over from 1.x by looking at the activity in our forum and there has been very positive feedback regarding the stability.

This is also clearly indicated by the heavily increased number of 1.x add-ons that were successfully tested (opens new window) and thus included in the openHAB 2 distribution - we have reached 80 add-ons now, complementing about 40 add-ons that were built for openHAB 2 right from the start. We are therefore getting much closer to having the openHAB 2 runtime as a full replacement for the openHAB 1 runtime for all existing users. When using textual configuration, it is fairly similar to setup and use.

Two missing parts are being heavily worked on:

Besides offering the comfort that people are used to in openHAB 1.x, there was of course also a lot of activity on the core framework (i.e. Eclipse SmartHome). This has specifically gained momentum since the end of last year, which can be nicely seen in the Github statistics.

Besides many small improvements and evolution of the binding APIs, a lot of work went into the Paper UI through which it is now possible to configure bindings and services as an alternative to the textual configuration files. 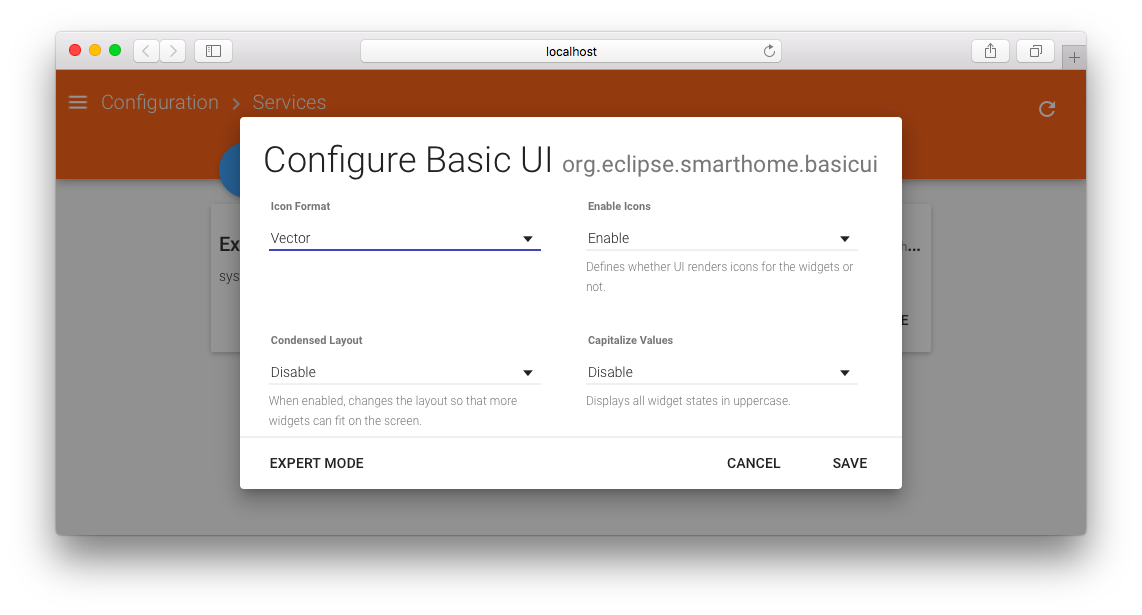 System configuration through the Paper UI

Two bindings that have by far the largest user base have been ported to openHAB 2 and now fully support discovery of devices, which is very useful in both cases, which are Z-Wave ad Homematic. Z-Wave supports a huge list of devices already and Chris is doing a phantastic job to maintain them in a dedicated device database (opens new window). For Homematic, this is not even necessary since the binding directly queries the Homematic CCU2 for the device meta-data and builds the openHAB-internal representation dynamically at runtime.

Last but not least, I would like to mention the digitalSTROM binding (opens new window) - this has been developed by the FH Köln (opens new window) and is by far the largest contribution in terms of lines of code and complexity of the integrated system.

My favorite new additions are no bindings though - they are the native integration with HomeKit (opens new window) as well as with Amazon Echo by emulating a hue bridge (opens new window). In the past people were using additional software like the ha-bridge or the openhab-homekit-bridge. Now this is fully integrated into openHAB and you can easily use Siri or Alexa for accessing anything that is connected to your openHAB installation.

The last good news about the beta3 release is that it is included in the SD card image that I have prepared for the PINE64 (opens new window). The PINE64 IoT package will be sent out to the backers starting later this week and it will directly ship with openHAB 2.0 pre-installed. For all other PINE64 users, who just ordered the board (most have already received it), the image will also be made available for download, so that you can flash yourself an SD card - it has never been easier to start with openHAB!